Price separation between islands when HVDC transfer is very low

In the early hours of Monday, 27 March 2017, we observed wholesale energy prices separating between the North and South islands by more than $30/MWh. Such an observation is not particularly unusual and is generally associated with a binding transmission constraint on the HVDC. However, on Monday, HVDC transfers were very low in a southward direction.

This appears to indicate something has gone awry with the operation of the wholesale electricity market. Closer investigation reveals that this outcome is a consequence of the manner in which the HVDC is operated when the need for energy transfers is small but the need for reserve sharing is not. In essence, this is a story about relative prices – energy versus reserves, and for each, North Island versus South Island.

Wholesale energy prices can be seen in Figure 1 to be in the $40/MWh to $50/MWh range in the early hours of 27 March. At about 1:00 am prices begin to diverge between the islands with a price difference of about $35/MWh evident at 2:00 am (trading period 5) between the North and South islands; North Island prices drop to about $6.00/MWh. 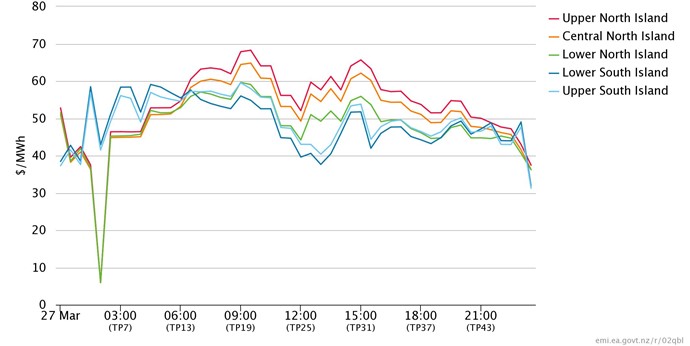 With prices lower in the North, HVDC transfers would be expected to be from North to South. This can be seen in Figure 2; specifically, they're just 22.5 MW at 2:00 am. This level of transfer is not close to the capacity of the HVDC link, about 1,200 MW in the southward direction.

Further examination of the information contained in the final pricing SPD case file for 27 March 2017 reveals:

In trading period 5 on 27 March 2017, SPD has found the least cost solution by keeping the HVDC in the round power zone. The HVDC is therefore effectively constrained to keep the southward energy flow at no more than 22.5 MW.

The HVDC link consists of two poles, each of which cannot be operated below a certain limit. Operating the HVDC in round power mode enables the link to be kept online when the net transfer is low.

The power flow on each pole is in the opposite direction when in round power mode (round power mode does not apply when only one pole is in service). Consequently, the HVDC is able to be ramped up quickly and reserves can shared in either direction.

Experiment relaxing the round power conditions

Using the vSPD model, we can simulate an HVDC operating configuration that prevents price separation between the North and South islands by forcing the HVDC outside of the round power zone. But the solution comes with a higher system cost than the situation that prevailed on 27 March 2017. (vSPD-online is unable to be used to conduct this experiment, as at this time it only permits demand and all aspects of offers to be modified.)

The counterfactual case (No RP) is more costly, i.e. over $500 more expensive. But it does result in energy prices in the islands differing only by losses, i.e. $37.23/MWh in the North Island and $37.48/MWh in the South Island. 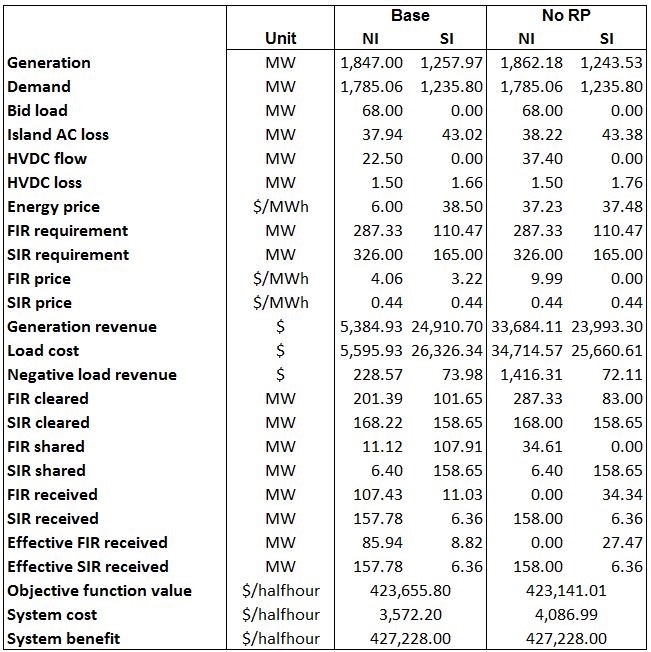 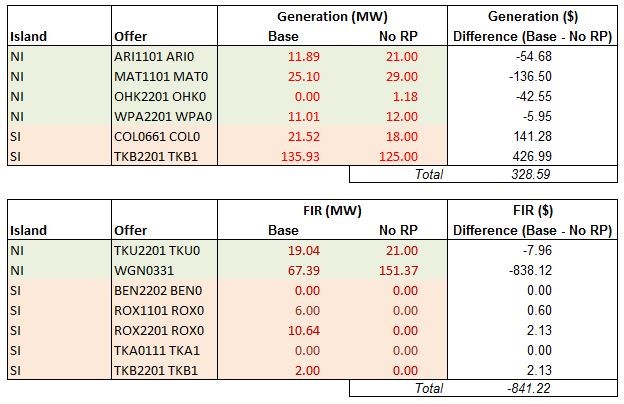