Nova Energy's McKee plant in Taranaki (MKE1101 MKE1) suffered an unexpected cessation of gas supply after gate closure but before real time. The plant had been offered in to the market to the tune of 46MW at $250/MWh. When it was realised that no gas would be available, the plant operator needed to take the plant out of the market using a bona fide offer revision. However, the offer revision was accomplished by erroneously increasing the offer price from $250/MWh to $2500/MWh, when in fact the operator should have decreased the MW from 46 to zero.

When final prices were calculated the next day, the McKee plant was the marginal unit in trading period 37 and therefore set the price. McKee was not the price-setting plant in trading period 38. As an aside, figuring out the price setter in trading period 38 gets complicated due to the interaction of the energy market with the reserve market as well as reserve sharing across the islands; hence we won't distract from the point of this post by explaining it.

As can be seen in the figure below, prices jumped up to about $2500/MWh or more throughout the North Island in trading periods 37 and 38. Although to be clear, these high prices were correct in trading period 38. 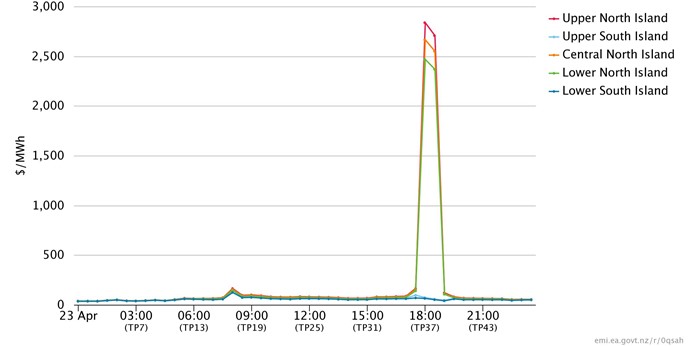 As can be seen in the results, had McKee not been the price setter, the next plant in the merit order would have been called upon and prices would have been slightly higher. When McKee's offer was modified correctly, the North Island reference price turned out to be $17.94/MWh higher whereas the South Island reference price was $27.23/MWh higher. Similar price differences can be seen in the generation-weighted average price (GWAP) and load-weighted average price (LWAP) for both islands. These increased prices are partially offset by a lower fast instantaneous reserve (FIR) price in the North Island.

The Compliance team at the Authority is now investigating. In the meantime, the Authority has claimed a pricing error relating to trading period 37 on 23 April 2018. Resolution of that claim is also working its way through the system.

We will keep you posted as to how this turns out.

Date claimed to be affected by a Pricing Error: 23 April 2018

The reason the Error Claimant claimed that a Pricing Error has occurred: Nova has wrongly modified energy offers at McKee for a bona-fide reason for trading period 37 and 38 on 23 April 2018. Instead of changing offered quantity to zero, Nova changed the offered price to $2500. As a result, McKee became the marginal generator for trading period 37. The impacts are lower energy prices and higher NI 6s reserve price.

Trading period claimed to be affected by the Pricing Error: 37

The Electricity Authority's decision regarding the claim: Not uphold pricing error claim

The Electricity Authority's reasons for its decision regarding the claim: The Authority's investigation has determined that the revised offer was a deliberate action by the trader, the system operator correctly calculated the dispatch instructions and the pricing system used the inputs as supplied, therefore the inputs were correct and the pricing process is correct.

We said we'd let you know how this matter was resolved. As noted above, the pricing error claim was rejected back in early May. That left just the Authority's Compliance team to investigate - you can follow the progress of that investigation here.