Price separation between the islands is becoming more prevalent

Since the beginning of 2017, and particularly over the past several weeks, we have observed an increasing number of trading periods where prices between the two islands are separating by amounts much greater than we've seen in the past. Historically, if prices separated, they did so in the same direction as the flow of energy over the HVDC transmission link between the islands. In other words, if energy is flowing northward across the HVDC link and prices separate, we would observe higher prices in the North Island than in the South Island. However, that is not what has been happening lately. This post attempts to drill down into why the extent of price separation has changed and why the direction has reversed relative to the direction of energy flow.

In about the middle of March 2017, the level of controlled hydro storage fell below the long-term average and has been trending down ever since. More recently, the 1% hydro risk curve was breached followed by the 2% curve. When hydro storage levels get low, the HVDC transmission link is used to transfer more energy southwards, i.e. thermal plant in the north generates energy to be used to meet demand in the south, thereby enabling hydro storage to be conserved for use later in the winter. Under more typical hydro storage conditions, the flow of energy across the HVDC link is generally in a northward direction.

Prices in each island have historically been in line with the following rules of thumb:

More than 950 trading periods have been observed since the beginning of 2017 where these longstanding rules of thumb no longer hold true. That represents more than 10% of all trading periods. The explanation for why this is the case can be sheeted back to the introduction of the national market for instantaneous reserves in late 2016. The HVDC rules of operation for fast instantaneous reserve (known as FIR or 6-second reserves) sharing can be summarised as follows:

Between the beginning of 2017 and 26 June 2017, there were 231 trading periods where the flow on the HVDC was very low (less than 22.5 MW) but price separation was equal to or greater than $10/MWh. Figure 1 shows that the HVDC energy flow was constrained to 22.5 MW (i.e. 6-second reserve sharing round power mode) during these trading periods - this can be seen as the orange energy flow bars in Figure 1 in either a northward or more frequently a southward direction. In line with the above operating rules, this means that more FIR can be shared over the HVDC in the opposite direction to the flow of energy, i.e. the green bars. In this instance, the benefit of 'backward reserve sharing' is greater than the benefit of energy sharing in the alternative direction, and SPD therefore constrains the HVDC flow to the round power mode limit of 22.5 MW. This then results in unusually high price separation between the receiving island and the sending island. In many cases, the extent of the price separation is quite large - greater than $50/MWh. To be clear, the x-axis of Figure 1, and Figure 2 for that matter, contains no chronological ordering; the trading periods in question are ordered according to flow direction and size. 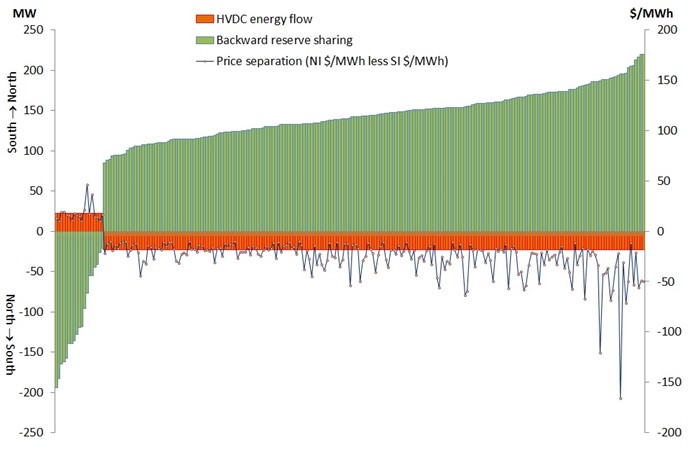 In some instances, energy transfer on the HVDC is forced into the reserve sharing zone so that more FIR can be shared in the reverse direction of the energy flow. When the HVDC round power mode is disabled, the HVDC energy flow is forced to change direction so that more reserves can be shared with the island having the lower marginal energy cost and higher marginal reserve (FIR) cost. In total, there are 719 trading periods (950 - 231 = 719) to 26 June this year that characterise this situation. Figure 2 presents the HVDC flows of the 160 trading periods (out of 719) where price separation is greater than or equal to $10/MWh in violation of the historical rules of thumb. In other words, in these 160 trading periods, the receiving island has a lower price than the sending island. In 12 of these 160 trading periods, the HVDC was forced to reverse its direction so that more reserves can be shared to the island in need - see the bars in Figure 2 that are red instead of orange (this forced reverse flow has to do with the sharing of frequency keeping across the HVDC link and introduces an additional layer of complication that is not really germane to the main point of this story). 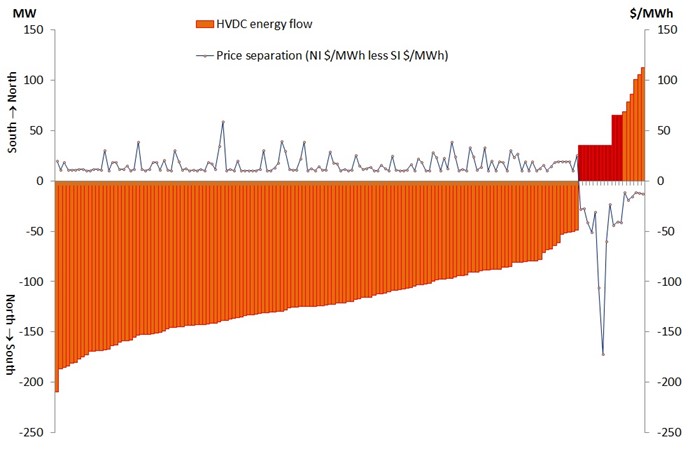